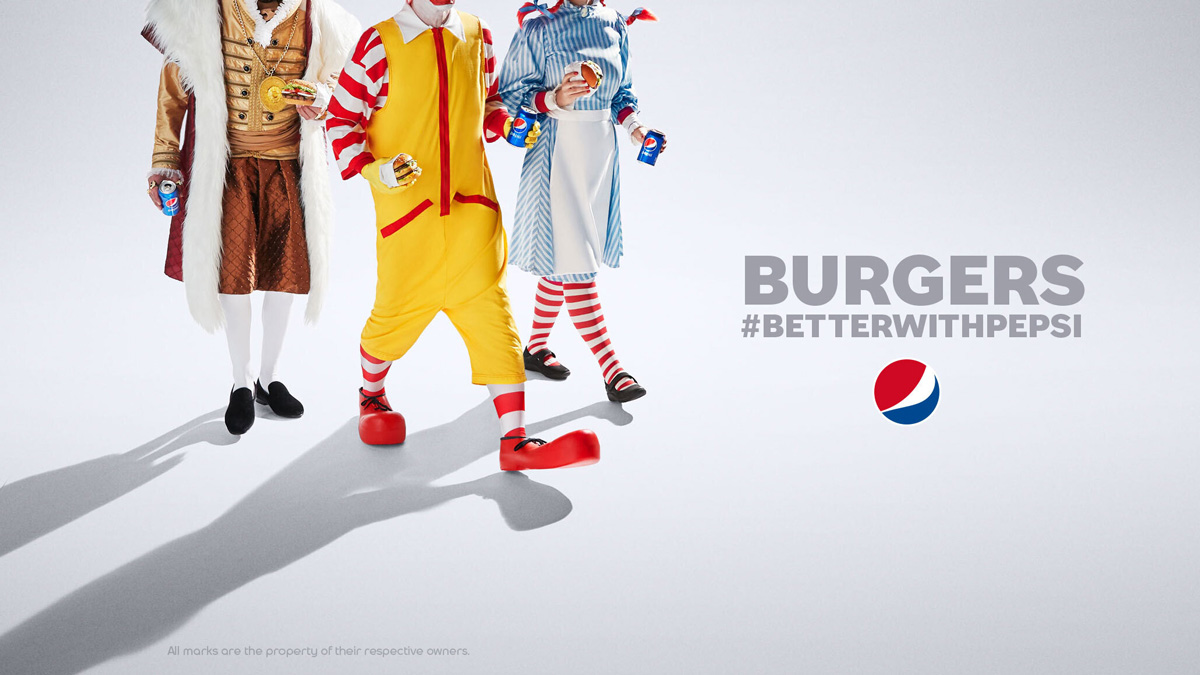 In the latest brand positioning campaign by Pepsi #BetterWithPepsi, the soda brand has once again stolen the limelight. Pepsi shows that it is no longer the underdog excluded from fast-food chains. They have repositioned themselves as the go-to drink with burgers. As a branding agency, we marvel at the boldness of Pepsi and its vision in this brand positioning campaign to get them ahead.

With creative photography, Pepsi’s logo is circled out on KFC, McDonald and Wendy’s burger wrappers. As boldly explained on their Twitter account, “burgers go #BetterWithPepsi”. They are always around even if these fast-food giants don’t offer them due to exclusive deals with their biggest competitor – Coca Cola.

ALL burgers go #BetterWithPepsi…even when we’re not on the menu, we’re always in the picture. 😉 Try for yourself this Friday on #NationalBurgerDay and the Pepsi is on us pic.twitter.com/6KRF77ONnf

When launching the campaign to gain more awareness, Pepsi collaborated with VaynerMedia US to further shift consumers’ mindsets. They created a National Hamburger Day Promotion! The idea was simple. Consumers were encouraged to share images of themselves with a Pepsi and any burger on social media. Upon verification, Pepsi would give them a rebate. It is a simple activity to make a statement which highlights that burgers do go #BetterWithPepsi.

What Is Brand Positioning?

David Ogilvy simply defined positioning as “what the product does and who it is for”. How does your product fit into the minds of consumers? Why would they pick your product over other brands? In the case of this article, which soda – Coke or Pepsi would you think of first, to pair with a burger?

This isn’t the first time that a big brand has tried to take out the competition. It is prevalent amongst the technological giants to point out the flaws of competition to gain consumers’ favours.

Sony released an advertisement in 2013 to launch Playstation 4, just days after Xbox One. In their Declaration of Play campaign, the video referenced their rival by saying they “refuse to be boxed in” and that they have “jaw-dropping graphics”, emphasising their edge over them.

Samsung has also repeatedly created advertisements directly attacking Apple. Apple, however, has taken the high road by not retaliating.

In the local market, Singtel has clashed swords with M1 and Starhub. However, they ended up being the ones who shed blood instead. As reported by mumbrella Asia in 2015, Singtel apologised for smearing the names of their competitors through their agency, which unethically hired influencers to do reviews.

Singapore has a strict Code of Advertising practice, which states that ads “should not unfairly attack or discredit other products, organisations or professions directly or by implication”.

You have been warned. Don’t play with fire unless you know how to put it out.

Where Does Your Brand Stand?

One example of a brand positioning campaign could be that of The Connoisseur Concerto  (TCC).  TCC, a masstige café chain, has a great selection of food and beverages. However, in the minds of most consumers, TCC was thought of as a coffee house café or Coffee Club. TCC had already been in Singapore for more than 15 years, but the brand awareness was still relatively low even though their business was brisk. Their company was able to sustain itself because they operated within the prime locations of shopping malls.

When Adwright was appointed, we quickly looked at key selling points within the café and that of their competition to develop a unique brand narrative. This was to connect the brand with its consumers. Art is inherently a strong culture within the company but this hadn’t been communicated before.

Hence, we created a series of campaigns with visuals to connect the art of coffee making and culinary food art to resonate with its consumers. The campaign cemented the brand’s positioning as an artistic, premium brand to existing patrons and the target audience.

Are you ready to take a leap to position your brand like Pepsi or TCC?