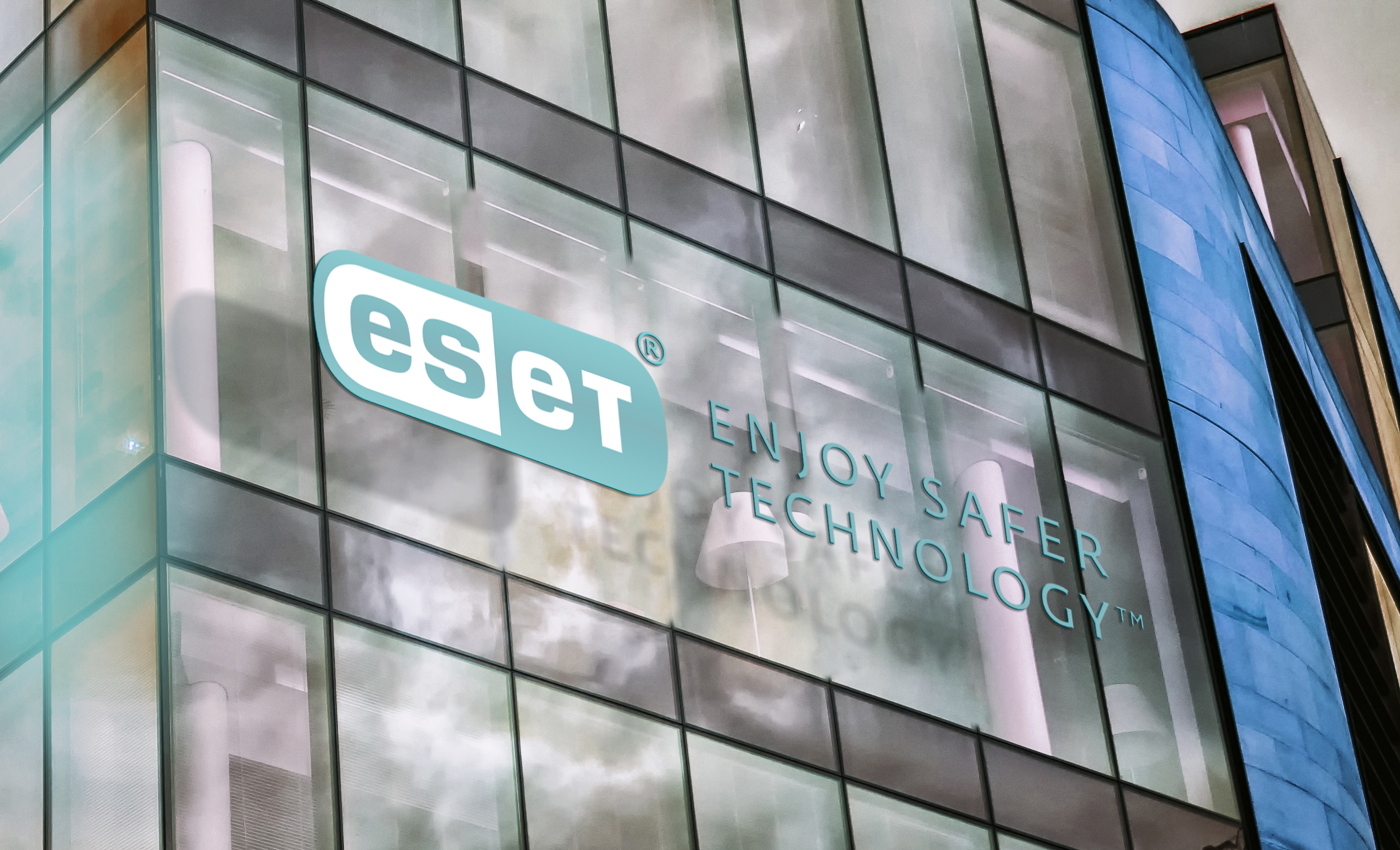 ESET was established in 1992 as an anti-virus software for computers. Since then, ESET has grown into an award-winning cybersecurity software company known for its threat detection functions. The company has garnered awards extensively over the years and has gained recognition for tackling cybercrime issues. 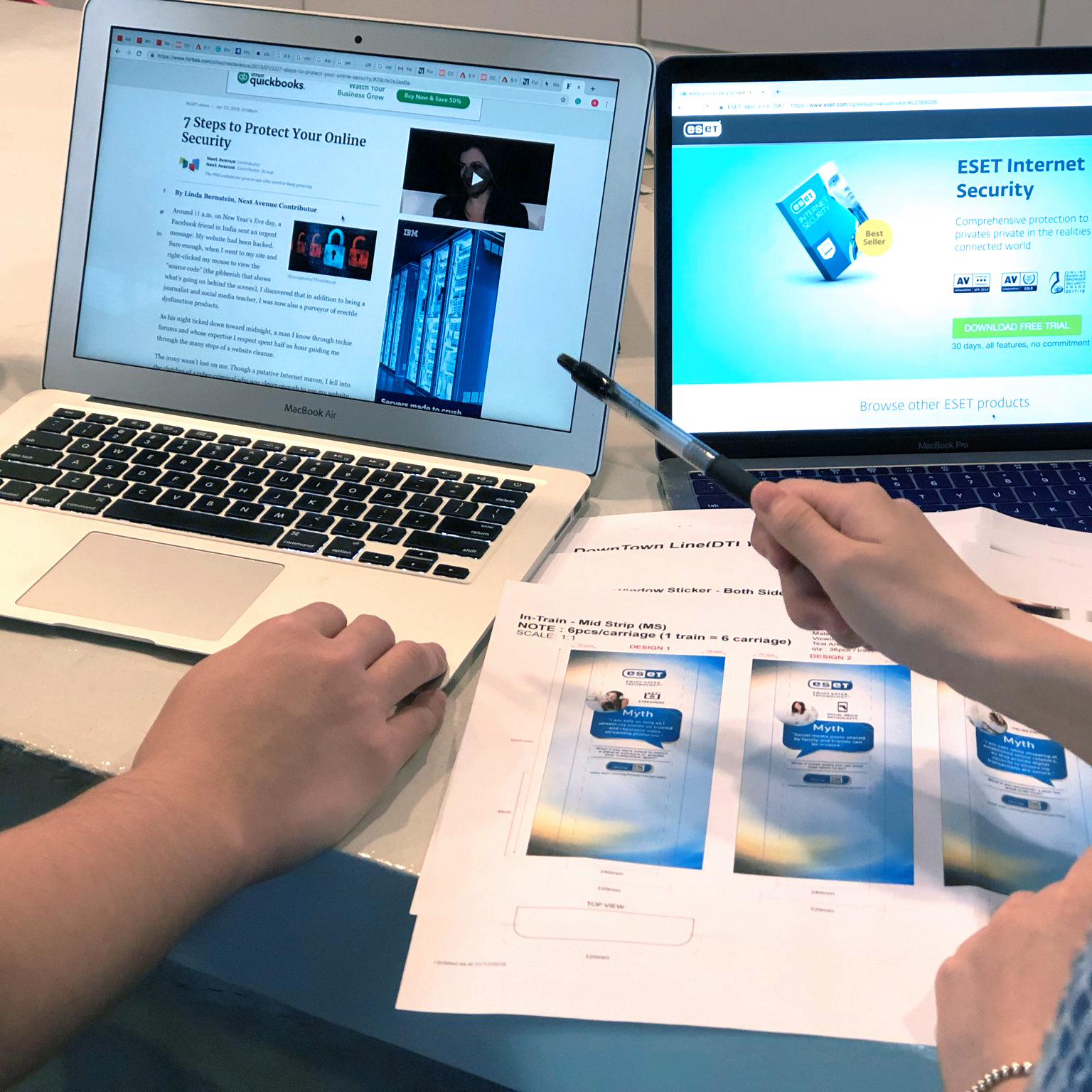 Despite a presence spanning more than a decade in Singapore, ESET was still unfamiliar with the local market. Its low brand awareness was attributed to the lack of differentiation from its major competitors. To add on, ESET’s communication materials failed to resonate and did not make an impression among local consumers. Therefore, ESET wanted to raise brand awareness as a means to increase its software free-trial download. Doing so would elevate ESET’s brand awareness and market share in the local market.

Adwright was chosen to produce new creative messaging from concept to development as part of ESET’s branding efforts to position itself in Singapore. It was to establish a clear point of differentiation in this highly competitive cybersecurity industry.

One of ESET’s survey revealed that 78% of internet users in Southeast Asia were unaware and uninformed about the cyber vulnerabilities that they are exposed to. Adwright leveraged on the survey conducted by ESET to identify the right brand positioning message that emphasised on ESET’s cybersecurity prowess. At the same time, a message was conceptualised to educate the public on the various cyber vulnerabilities.

To appeal to a wide demographic audience, Adwright conceptualised the campaign message headline, “Keep Your Privacy Private” to resonate and be relevant to trending cyber issues.

The visual depicts a man showering and taking a video of himself, unknowingly exposed to hackers who have compromised his privacy. It symbolised the harrowing thought of being vulnerable. Although the image was larger than life, it presents a depiction of how personal space could be easily invaded without security measures. 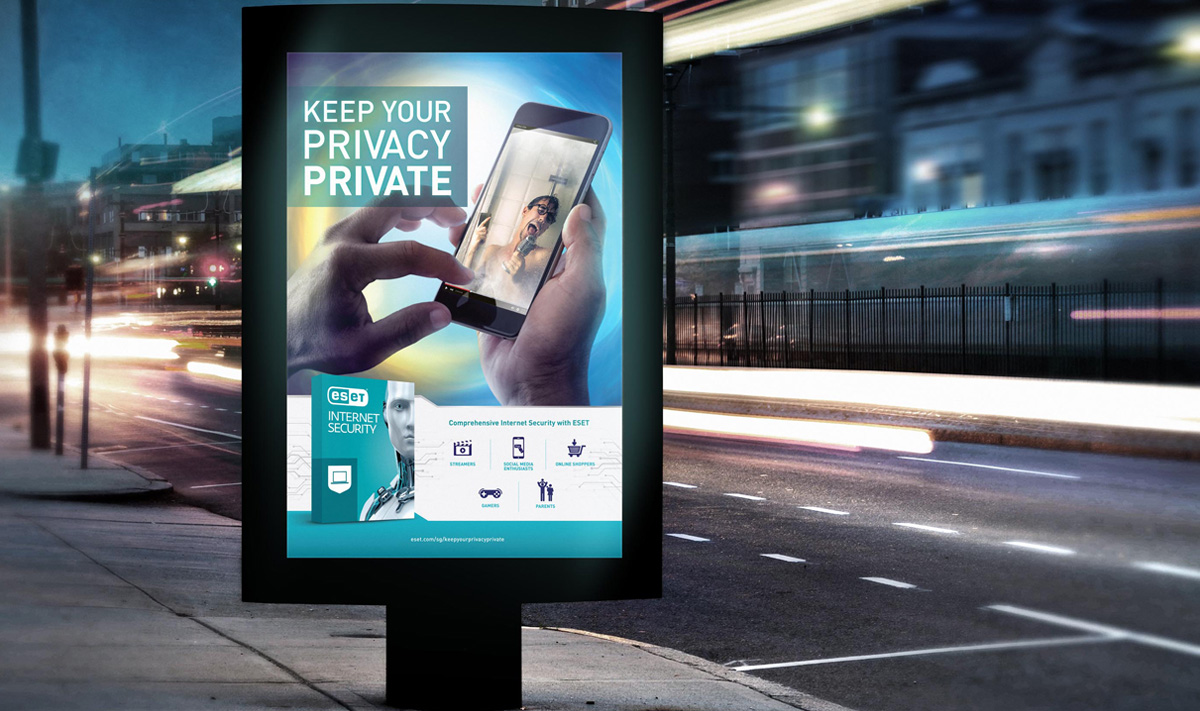 To establish greater relevance, the public was grouped according to 5 types of online activities. This was to streamline the public into different user categories that they could identify themselves with. These categories were gamers, online shoppers, streamers, social media enthusiasts, and parents (with children that are engaged in online activities). The association strengthened the relevance of the message and created information the public could resonate with.

The concept of “Myth and Reality” was used to further illustrate the different vulnerabilities and threats each type of users might face. One of these was how an online shopper opinionated that it is safe to shop from established online retailers as their websites are deemed to always be secured. However, in reality, cybercriminals could create legitimate-looking online ads and sites to trick shoppers into disclosing their personal information and payment details.

A research conducted by Ernst & Young revealed that Singaporeans spend more than 10 hours a day using their digital gadgets to surf the internet or engage in online activities. Through demographic understanding and analysis, Adwright positioned the advertisements on the Downtown and Northeast lines as these lines played an essential role in transporting people to work or school on a frequent basis. The routes indicated a constant high-volume of commuters who would usually be engaging with online activities. Therefore Adwright chose to utilise this platform for ESET to educate and to build brand awareness to this target audience. The advertisements were strategically placed in MRT trains to inform commuters about the threat of cyber vulnerability. Hence, the advertisements could raise awareness on the importance of cybersecurity. 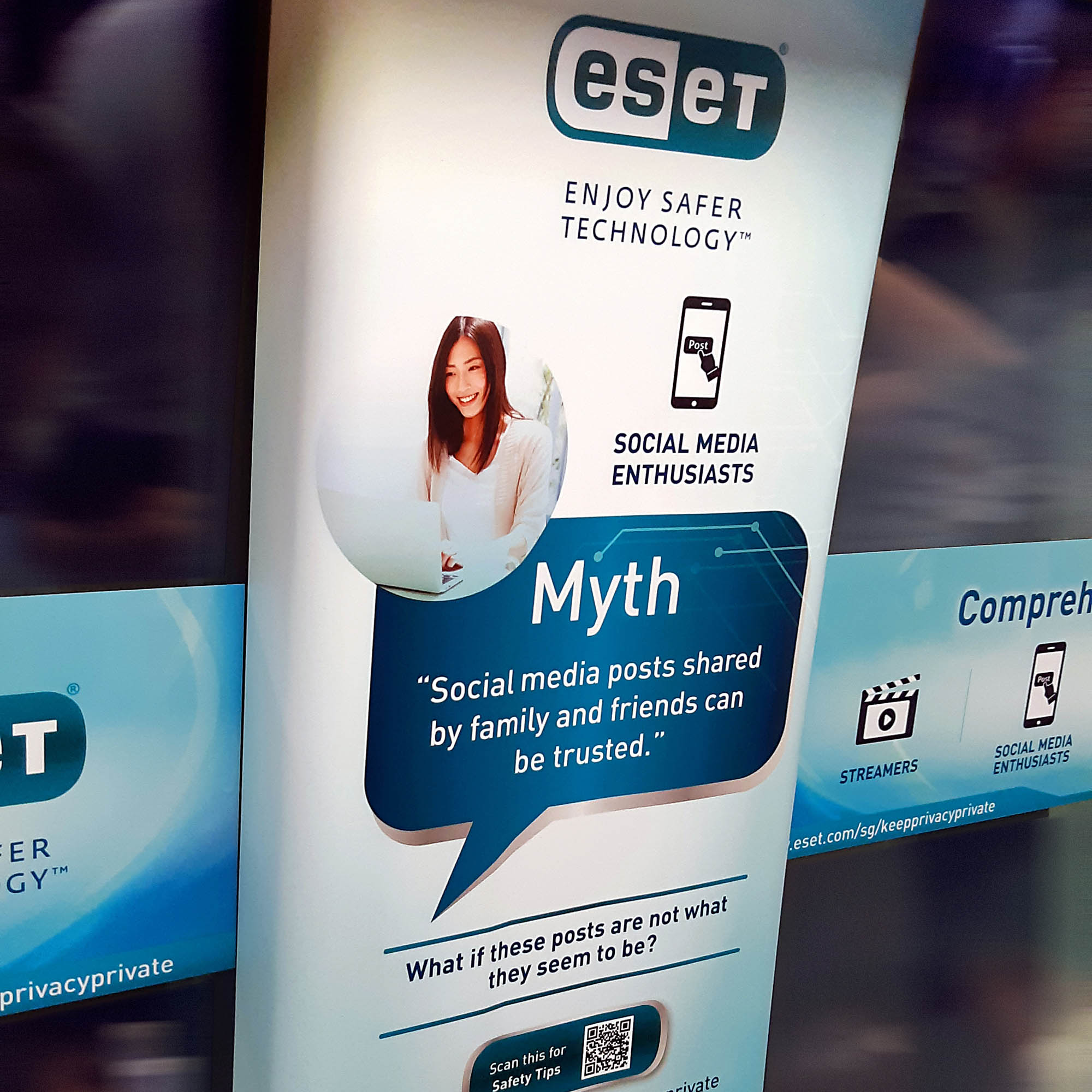 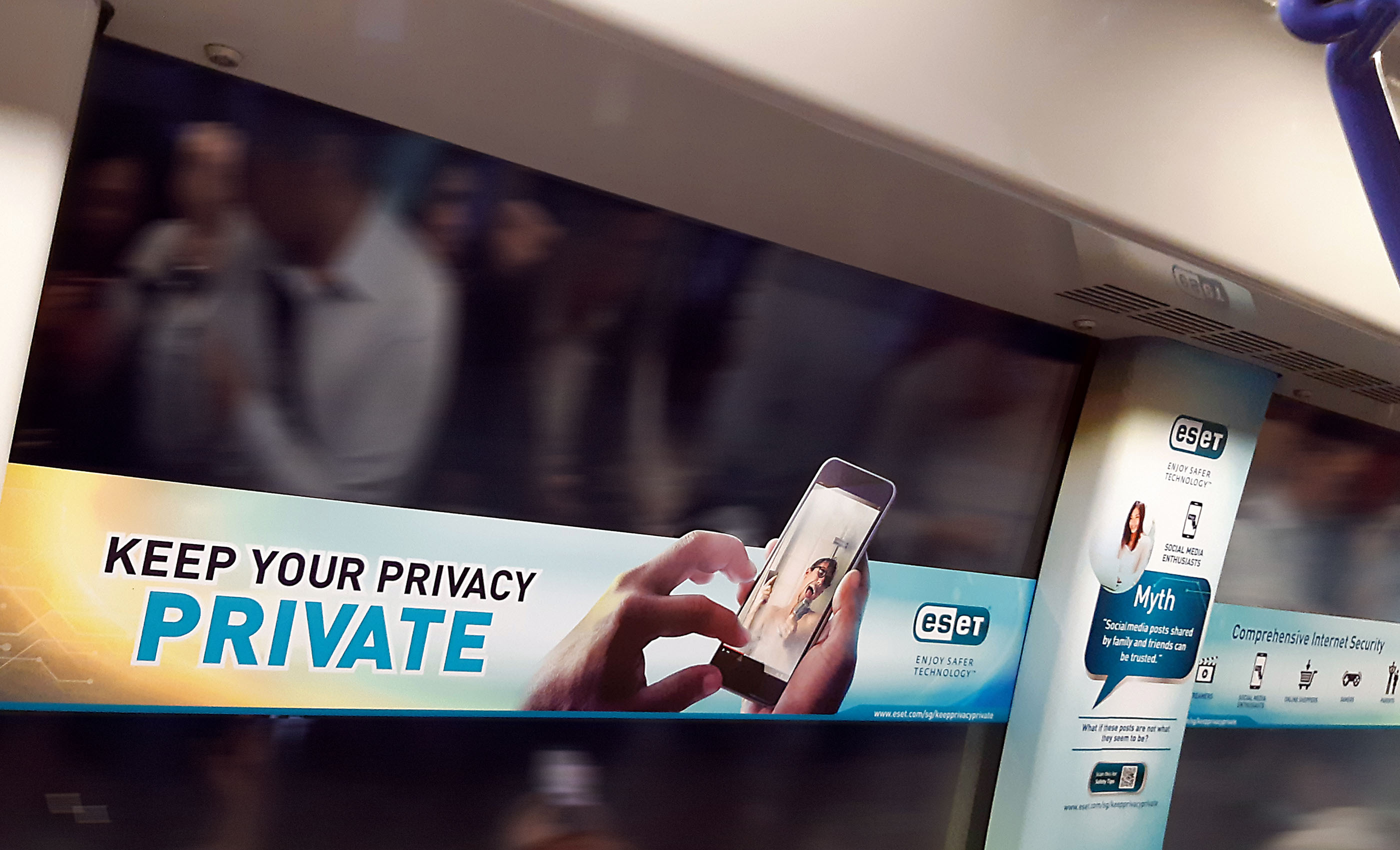 Programmatic buys and social media posts on channels like Facebook and Instagram were utilised to communicate messages directly to internet users. These platforms were relevant and led curious social media users and web visitors to the campaign’s microsite. The microsite expanded on the “Myth and Reality” content of the 5 online activities. They informed visitors on the cyber issues and precautionary measures that internet users should be aware of.